I went up to Lake County this weekend to tend to my firekeeping duties for a women’s sweat lodge. It was unusually hot (high 70’s), which made for a hot, tiring day for both the fire keepers and the women attending the sweat. This is my fifth year as a firekeeper for L, a wonderful crone who pours the water in the sweats and leads the women in a day of ritual and prayer.

L goes by the name “Grandmother” because she is – well old and wise, hence appropriately a grandmother. One could argue that she also chose that name for herself because one of the roles of a firekeeper is the “grandmother”, which means there are “extra special duties of honor” that are assigned to that particular firekeeper. (There are multiple firekeepers that are needed to keep the fire going all day). Point being that there is something significant about the role of the grandmother in our culture. Interestingly, I call her by her name, L, and that might have something to do with the fact that I met L right around the time my maternal grandmother died (at the ripe page of 91). L and I have a very special relationship. I adore her. She is irreverent. There is that stereotype of crones and sages being wise and sweet. L is wise, but sweet? She is a hell raiser, and when she wants to be grumpy, she is grumpy. I guess that’s permitted when you hit 80. I’m amazed at her physical flexibility and endurance to crawl in and out out that lodge. Once the women enter the lodge, they are asked to stay there for the duration, which may be as long as 4 hours. (We open the door after every round, and there are four rounds, so there is opportunity to feel some fresh air). L, who is 80, remains seated in her spot the entire time. It’s quite impressive. In addition to having the endurance to sweat for up to four hours, L also does an impressive job of “holding the space”, and leading the women in prayers throughout the day. Women step out of the lodge feeling purified and always express how grateful they are for L’s offerings.

But here’s what I really love about L: Her irreverent sense of humor. For example, yesterday when I was talking about how I would be driving home, she said to me, “make sure you’re feeling grounded enough to drive over that mountain.” I tried to assure her that I would drink some coffee before hitting the road, and she was quick to remind me that she was talking about “being grounded.” Then, with a smile, she said, “Do I have to bitch slap you to get you to hear me?” My partner happened to be attending this sweat, so I teased Grandmother back, saying, “Not in front of my partner.” Then, Grandmother basically chased me a few feet with a mischievous smile on her face until she hugged me, whirring I lightly slapped her on her butt, and she did the same to my butt. Now that’s some grandmotherly love!

In all seriousness though, what made yesterday so special was that I felt comfortable enough to bring my partner I, and and her 10 year-old daughter, N, with me. Grandmother asked N to be a “junior-junior-firekeeper-in-process”, which N was thrilled to do. While all of the women were in the lodge (including my partner), N and I hung out, tending to the fire, watching deer, and talking about nothing important. N is dealing with 10 year-old tweenie stuff that comes up now, and I think a day in nature was good for her. Nature has that way of absorbing all of the crap that we keep stuck in our heads, the biggest piece of crap being our ego. And I am definitely seeing that little 10 year-olds already get caught up in that ego stuff. It’s hard to watch.

At one point during the ceremony, when the door was open, L leaned over to me and whispered over and over again, “I need you to be grounded right now. There’s some stuff coming up right now in the sweat, so please be grounded, grounded, grounded.” I have some specific physical ways of grounding myself, such as planting my feet and heads firmly on the ground, and drawing out the bear energy, but in this case, I felt that I needed more. I found myself chanting the Heart Sutra to myself as  the pipe was being passed around. By the time the pipe got to me, I had finished chanting the heart sutra, and felt more grounded. It really helped.

I later thought about how there have been other times when I have offered buddhist chants to the circle during sweat ceremonies. Now that buddhism has found its way over to the west, I suspect that we will see more blending of traditions such as Buddhism and the Native American Church. They have a lot in common, particularly when it comes to the interconnection of all beings. I remember one time when we were all talking about meditation, L said to me, “That’s what we’re doing in the lodge the entire time, is meditating. It just looks a little different.” She’s pretty accurate when she says that. When you look at the neuroscience behind it, you probably would see similar brain activity changes in people who attend both sweat lodge ceremonies and people who sit in traditional vipassana or zazen meditation. I think that could make some interesting research.

To completely digress, it was also fun to have this sweat on Pi Day, but THE Pi Day, the one that we only see once a century. I and N made some pies the night before and brought them to the sweat. The goal was to eat them at 9:26 a.m., but that didn’t happen. (We came close; we ate them at 9:35 a.m.). It was a fun way to start the day, eating pie, talking about irrational numbers, as the deer grazed in the meadow not too far from us. 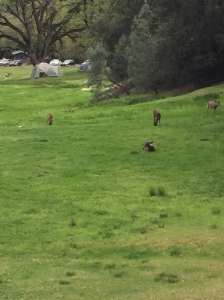 Deer grazing in the meadow

The fire in its early stages with the lodge in the background.